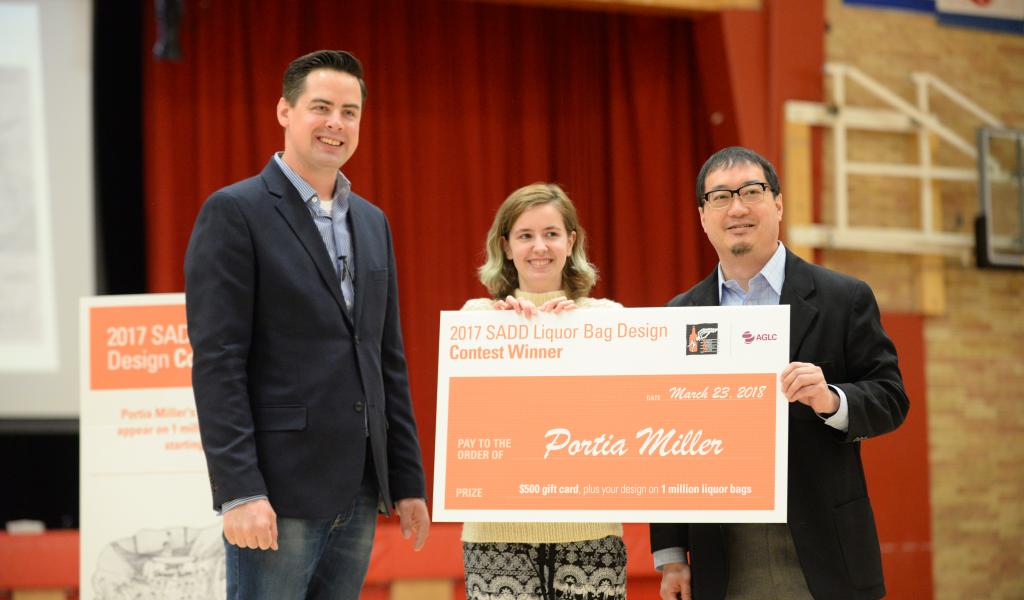 Selected from 350 entries provincewide, Portia’s winning design and message will be printed on one million brown paper liquor bags, and distributed to liquor stores throughout the province starting May long weekend.

“I wanted this piece to evoke emotion but also be something interesting to look at. I wanted every part of the picture to have some sort of significance and reason. For the most part I wanted people to see it and say ‘yikes, that could be me.”

All submissions were judged based on originality, messaging and design. In addition to the overall winner, nine entries were also selected from three categories: Kindergarten to Grade 6, Grades 7 to 9 and Grades 10 to 12. All winners will be awarded gift cards for their efforts.

“Congratulations to Portia, the winners and all the students and schools for sharing their inspiring and honest messages on impaired driving. AGLC is once again proud to partner with SADD Alberta on a program that supports our commitment towards social responsibility. Every single liquor bag submission is a constant reminder that we all play a role in helping keep Albertans safe”

The SADD Alberta Liquor Bag campaign works with elementary, junior high and high schools to have students create a message on a paper liquor bag related to the dangers of impaired driving. Once students create their messages on the bags, they are then delivered to liquor stores during the Christmas period in the student’s community by teachers or a SADD representative. Nearly 300 schools throughout the province created impaired driving messages on more than 63,000 liquor bags.  Teachers are encouraged to submit their top entries for the SADD Liquor Bag Design Contest in three school categories, with one overall winner selected.

Once again, the voices of Alberta’s youth have come across loud and clear sending the message that they want to end impaired driving. Let’s take the time to reflect on what young Albertans are saying and pay attention. Congratulations to Portia as the winner of the design contest. Not only does Portia demonstrate incredible artistic ability – but also a defined social consciousness relative to driving while impaired. Thank-you to all the students in Alberta who created messages for paper liquor bags, the adults who work with our youth to educate them on the dangers of driving while impaired and also to the many liquor vendors in Alberta who support this campaign by sharing the student designed bags in their retail stores.

All winning bag designs and contest winner information can be viewed at saddalberta.com.